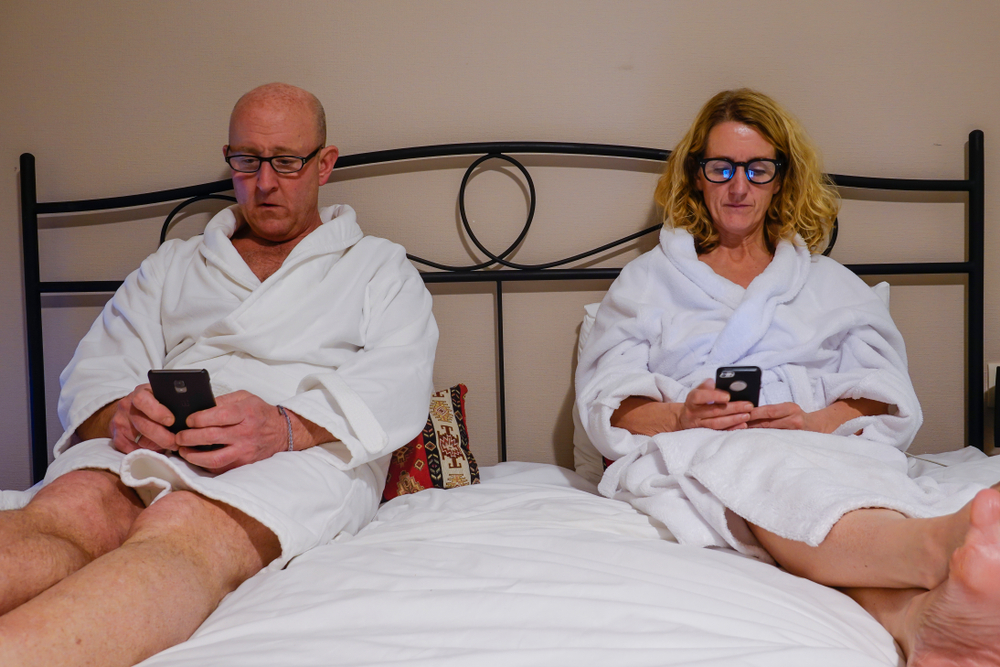 It had happened again. Rachel watched her husband roll over and pretend to go to sleep. This time he hadn’t said a word when she asked him to stop during sex. The pain had become unbearable shortly after penetration and although she’d tried to ignore it, grit her teeth and let him carry on, it felt as though she was ripping internally – there had been zero pleasure, except that they were physically close and she could hold him. Was her painful sex due to the menopause?

‘Sorry darling’, she said, cuddling up behind him, but his response was just a grunt. He didn’t even want to try anything else. Rachel turned back and curled up on her side of their huge bed, hugging herself and trying to get to sleep. Tomorrow, she thought. Tomorrow I need to make an appointment to discuss my symptoms with a menopause expert and find out what my options are.

Painful sex can be caused by the decrease in estrogen during the perimenopause and menopause, leaving the lining of the vaginal passage thinner and more prone to tiny tears or abrasions. The natural lubrication of this area of your body also decreases, so during penetration, no matter how gentle your partner is, any movement is limited by friction. In addition, the entrance to your vagina may become less flexible and elastic, which again is because natural collagen production to this area is reduced during perimenopause and menopause.

All of these symptoms are completely natural, but they can cause discomfort and often pain, which in turn reduces the woman’s desire to have penetrative sex. The lack of intimacy that can follow is often even more upsetting than the actual physical pain. It is imperative to seek information and knowledge about what is happening to your body and why you are experiencing these symptoms. There are several HRT treatments such as patches, gels, pessaries and creams containing key hormones such as Estrogen and testosterone that help reduce vaginal dryness and allow you to resume your sex life

‘Darling’, said Rachel to her husband who was slumped in ‘his’ swivel chair in front of the television. She could tell he was just surfing the channels, hoping to come across something entertaining. ‘Let’s go to bed’, she suggested.

He raised his eyebrows, but didn’t move. He was going to need some stronger persuasion methods; she could tell. Over the last year or so, the time they actually spent together alone, without their two children hovering around, or busy working, had virtually vanished. It was as if neither of them wanted to acknowledge that sex had become a no go zone, a taboo subject, which now was having a detrimental impact on their marriage.

Rachel knelt down in front of him, put her hands on his knees and tried again. This was not the time to go into detail about her visit to the clinic and the treatment she had chosen to follow. All he needed to know at the moment was that she loved him and was ready to have sex again. It had taken a few weeks for the patches to take effect and rebalance her hormone levels. She was excited to rebond and reignite the physical side of their marriage, but knew he had become wary and anxious about it. He had even asked if she was having an affair! Time to revert to pre-marriage seduction methods, she thought to herself, as she kissed her husband until he started to respond.

The weekend in the Cotswolds had been a surprise anniversary present from Rachel’s husband, with some fashion advice from their teenage daughter, who had chosen the black silk lingerie Rachel found beautifully wrapped in tissue paper on the huge bed in their cosy cottage. Spring shouted from the hedgerows and flowerbeds that surrounded their Airbnb and time stood still – a second honeymoon thanks to the power of knowledge and choice.

Please contact the clinic and book an appointment to discuss your concerns in confidence. There is no need to suffer in silence. There are always options.