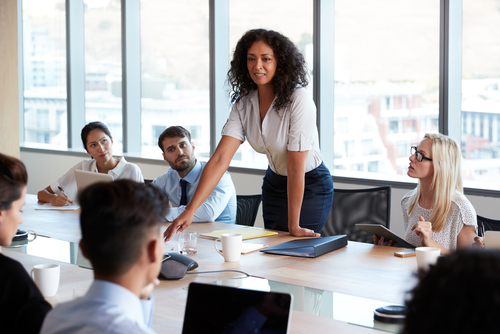 Helen is 43. Her story is sadly all too familiar. At the end of 2019, after months of struggling to focus at work and losing all confidence in her ability to juggle the demands of being a senior manager, a mother of two and a wife, she had booked an appointment with her GP. Were these the first signs of perimenopause? She was prescribed a course of low dose anti depressants, which should, she was told, relieve her symptoms of anxiety, sleeplessness, irritation and low self esteem. Diagnosed with mental health issues Helen found herself struggling even more at work and home as she tried to understand what was happening to her. After several verbal warnings, she was on the verge of losing her job and her marriage was falling apart.

A return visit to the GP, where the locum she saw suggested she might be perimenopausal, was the turning point. Helen had never heard of the perimenopause. She thought you only became menopausal when your periods stopped and she was still having periods. Wasn’t she far too young at 43? Did this mean she would have an awful menopause? Instead of reassuring her that her mental health was not the cause, the news increased her anxiety and fear because of a lack of understanding about this phase of the menopause. She was advised to book an appointment at the menopause clinic for further advice and possible treatment.

Helen’s case illustrates three very important areas where education around the menopause needs to change to prevent more women from losing careers, relationships and self-confidence. First, GPs need to have mandatory training in the menopause; second, workplaces need to offer support for women of all ages, but particularly those in their early 40s; and finally, schools need to include the menopause on sex education programmes. The latter has been put in place, with the Relationship and Sex Education Curriculum (RSE) now set to include the menopause, along with periods and pregnancy, in secondary schools from September 2020.

When Helen first came to the clinic she described how she had felt too embarrassed to talk with her line manager or anyone else at work about her feelings of anxiety, low mood, lack of confidence and poor concentration. The culture of the organisation was one of work hard/play hard with no room for slackers or dead wood and the stress of trying to maintain a façade became overwhelming.

Dr Meyer gave her accurate knowledge about the perimenopause and made her aware that much of what she was experiencing could be due to fluctuating hormones. She was able to return to work armed with ways to manage her symptoms better. Gradually, her confidence returned and her performance at work improved. Since then she has made a point of sitting down with her line manager and explaining what she went through. The organisation’s culture is now far more tolerant and accepting of personal needs and Helen has been asked to act as the main point of contact for other women if they need someone to talk to.

But there are thousands of women in their early 40s who are still being told they are too young for the menopause. No one talks about the years leading up to the menopause, or what you may experience psychologically and physically as your hormone levels begin to fluctuate. Yet, if these symptoms become debilitating, they can interfere with a woman’s personal and work life. Too many women still suffer in silence, are the objects of jokes, lose their confidence with the knock-on effects spilling over into their careers and relationships. A wrong diagnosis of mental health issues can just exacerbate their feelings of hopelessness, unworthiness, and fear.

Seeking the right help and support can turn their lives round and set them back on the track of success at work and happiness in their personal lives.